Training reflexes is an extremely important aspect of training in all martial arts and other sports. Frequently it is also an overlooked part of training because it’s not the type where you will exhaust your body a great deal. Almost all types of physical training in boxing and other striking will end up exhausting you except when it comes to slow practice of technique. All other types of training such as drills for speed, power or endurance, will usually end up leaving you sweating. All of these are fundamental parts of fighting but there is another way how you can elevate your ability to fight and that’s improving your reflexes.

Getting a reaction ball is an excellent way how to mix up your training and allow yourself to become better in new ways. Reflex training has been around for a long time and is actually nothing new but lately it has been getting a lot of more recognition that it deserves and so have these reflex balls for fighting. So why take the time and actually develop reflexes through one of these fight balls?

Any fighter that is throwing a punch or a kick, it all happens very quickly and you must react quickly to it. The more trained the fighter is, the faster his speed and the less time there is to react. So if you’re up against a fighter that has a speed advantage, you better have great reflexes to combat it. Reflexes do get developed naturally through striking and sparring in general because you’re continuously stretching your ability to react under pressure. However, once you put your mind to and actually spend some time on working on reflexes themselves, you’ll notice that your ability to react quickly in a fight becomes much more effortless. There are many ways how to develop reflexes for fighting but one that we’re going to have a look at is the previously mentioned reaction ball.

Who uses reaction ball and how to improve reflexes with it?

One of the most frequent users of reflex ball is none other than Vasyl “Hi-Tech” Lomachenko. Known for his ability to break opponents down through technique and insane foot work, Lomachenko has been seen working on his reflexes extensively. With such a start using the elastic head ball hats, you know it’s not just a fad. One of the best features of this equipment is that is very small and light so you can even use it at home as long as you find a little bit of training space. You could also easily bring it with you whilst traveling.

The fight ball is used to develop hand eye coordination and ability to react to a moving object heading your way. It doesn’t get more complicated than that but you might consider where this will play an advantage when you become better at over time:

Now that we’ve gone over the uses of this tennis ball hat (another name it’s associated with), let’s look at the most popular ones out there with an overview of each. 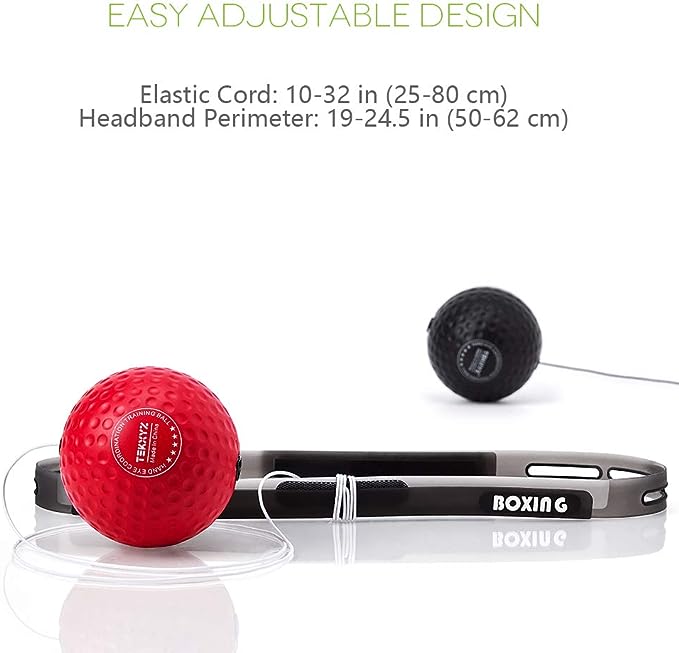 I'd have to start that TEKXYZ product is the most highly rated ball with tons of people loving it. The design is is simple yet sleek. The ball itself is quite light and soft which helps because you if you end up missing a shot, it won't put you off training in case you get an accidental smack in the face. 😉 It has two balls that can be attached - a black one and a red one. The black ball is easier to start with and not as bouncy. Once you 've mastered the black ball, you can attach the red one, which offer more bounce and requires even more accuracy and reflex to geth right. The design of the headband does not stand out as much as other designs and is great for use in public without looking silly. 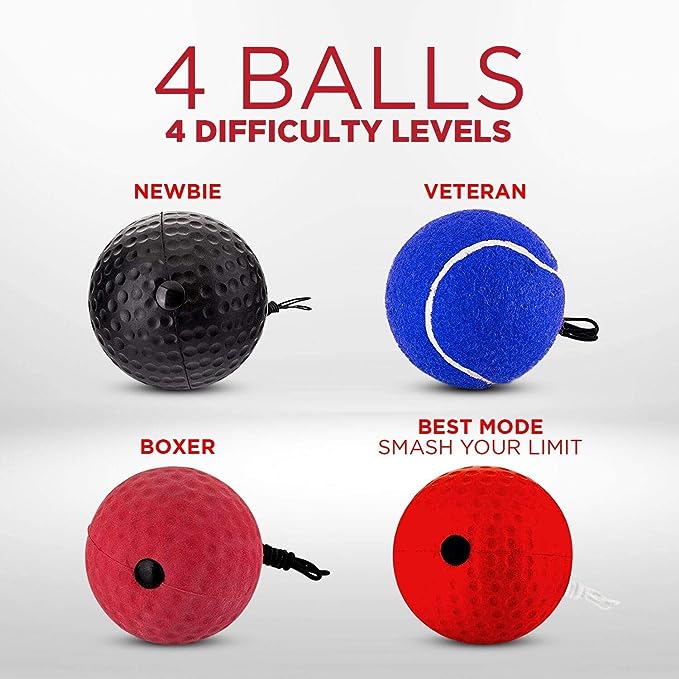 This is the second highest rated ball when considering rating and user reviews. Where Champs reflex ball shines is that it has 4 difficulty levels. If you feel your reflexes are not particularly good, you can always start on the ball that is least bouncy and work your way up. It comes with a band that is 2 inches wide and the band is adjustable to fit all shapes of heads. The connection between the string and the headband sits on a buckle that will let the ball rotate 360 degrees. This means that this ball will bounce all around and not just mostly in front of you, like other balls would. This is great if you want to practice reflexes at all angles and want to dodge and weave from different positions. 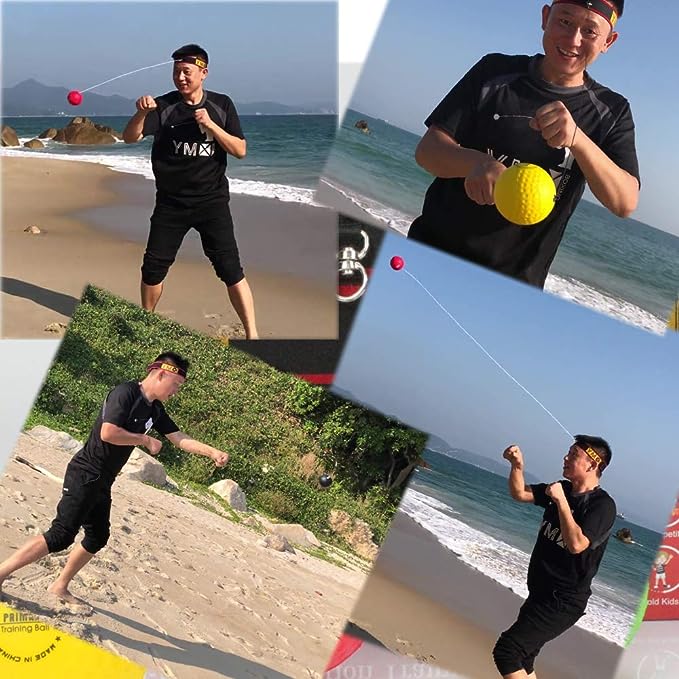 This is a second iteration of YMX boxing balls and has some improvements over the first version. To start, similar to the previous reaction ball, it comes with four difficulty levels e.g. four balls. What is different about this one is that it comes with two headbands. This is a bit of a unique thing here because it means that actually two people can train with it. Similar to the other reaction balls, the balls themselves are not hard enough that one would require wearing actual gloves. This means it is easy to get started with it and can let you work your way up from the easiest to most advanced ball without any extra equipment.

Boxaball bears similarities with the LOM product design. It also has a head strap with a simple design. You will find a Box A Ball logo on the side of the black strap. You can actually adjust the string in its length if you find it is too long. It’s not immediately obvious that this string can be adjusted but you’re able to do so by bulling the string through the ball. The alternative approach on other products is by tying some loose knots between the ball and the headband which will shorten the length but you’ll need to untie it afterwards, which can be a bit difficult. This reflex training equipment comes with a red branded ball at the end of it which is a bit softer than a tennis ball. 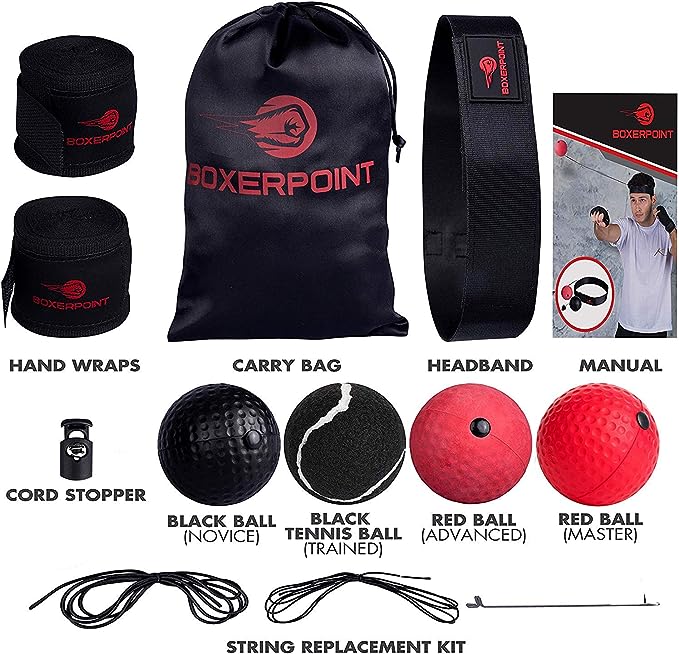 BOXERPOINT comes with the most equipmnet with it: it has a carry bag, hand wraps, headband, four balls, a string replacement kit, a cord stopper and an actual manual. It is highly rated, offers plenty of difficulty variety and lets you replace the string if it gets broken. Most other reaction balls do not come with a string replacement kit, so the longevity of this reflex ball is likely to go a long way. The headband is adjustable with a strong velcro and is comfortable to wear. 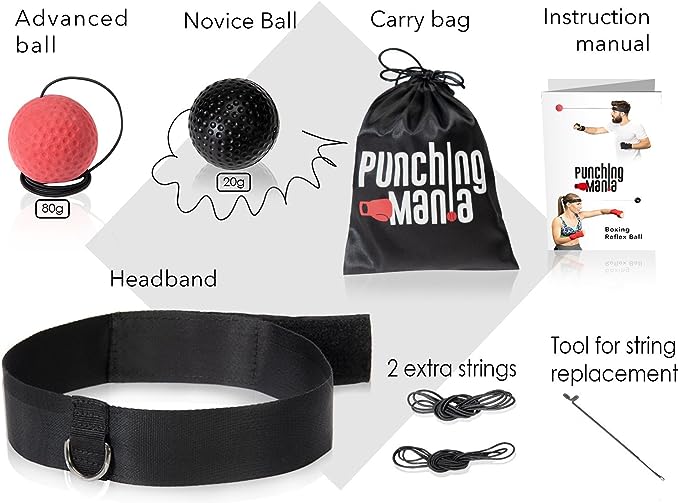 Punching Mania boxing reflex ball is another highly rated equipment out there. Just like the previous punching ball, it has a replacement kit in case one the strings snap. It has two difficulty levels: advanced red ball and a black ball for novices. It comes wihth a branded carry bag where you can keep your training equipment. It does also come with a manual to give you some guidance on how to use this boxing ball. Mostly, manuals are not needed since it is quite straight forward how to punch a ball that comes your way. There are also plenty of videos available online on how to train using a reflex ball. But it certainly won't hurt to get some free advice and some training tips. 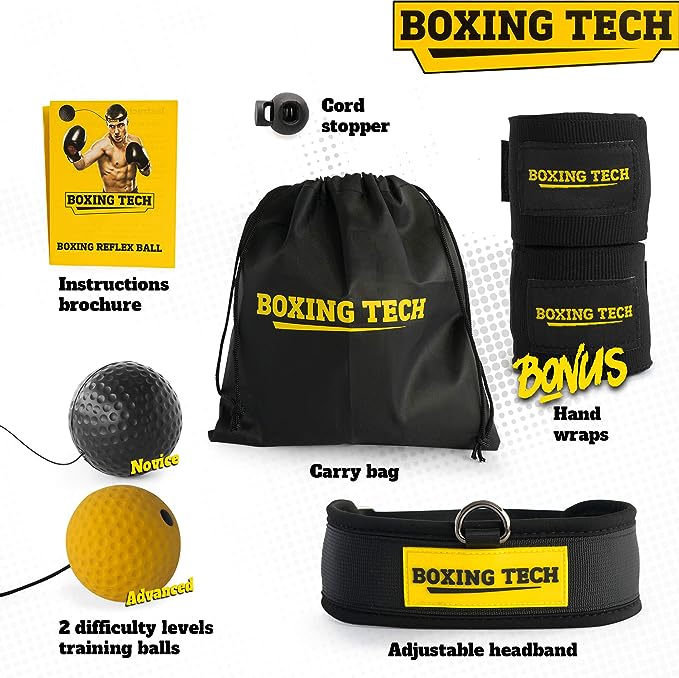 This equipment is very similar to the Punching Mania reflex ball. The difference here would be that it doesn't come with a replacement string but it does have hand wraps. Whilst it may not be necessary to wrap your hands using the reaction ball, it certainly is a great bonus. If you want to keep your wrists and knuckles tight, having hand wraps certainly helps to achieve that. It comes with an adjustable headband, a manual and 2 training balls. The carry bag helps to keep it all in one place and the two trainining balls - each providing different difficulty, is a great overall choice.

LOM has made two types of the elastic head ball products, one with a strap around your head and another one with an actual hat. Both would get the job done and it doesn’t make much difference whether you get the one with a strap or one with the head band. What makes this product appealing to some more than others is the design as LOM have placed a USA flag on the side of the hat and large USA writing on the front. This one has a tennis ball at the end of it so you know it is not as soft as other balls. Attached to the hat you’ll find little clips that will keep the cord safely attached to the hat. The hat as any other hats can be adjusted so will fit different head sizes.

This completes our review of this fighting equipment. Many fighters swear by this type of training and have tested it over time. It does work and improve your accuracy, reflexes and ability to see shots coming your way. What makes this equipment stand out is that it’s cheap to begin with and it is also a very fun way to mix up your training. Punching bags is a necessity to become a great boxer but there are many ways how to become a better striker. We hope you’ve enjoyed our review and hopefully you will give the boxing fight ball a chance to become a tool in your training arsenal.