UFC is comprised of all types of fighters – you have technical fighters that lack the power; then there are big trash talkers that can’t back up their talk. Some pack a huge punch and have incredible knockouts but you fall asleep during the pre or post fight press conferences. We all love great fights and they are especially fun if they have a great build up. We've put together a top five list of most entertaining UFC fighters. They may be entertaining in the way they fight, the way they talk or the way they think. But one thing is clear, if you enjoy watching UFC, these fighters bring a lot of fun to the table.

What fans love to see is an entertaining UFC fighters that bring something unique to the game. Although we respect all fighters by having the guts to enter the octagon, a fan likes to see some excitement. After all, fans decide what they like and they want to see something new, something original. So what we have here is a unique list of entertaining UFC fighters that fans love to watch either inside the octagon or outside the octagon. By no means this was not an easy list to pull together.

Cody Garbrandt is not known for his press conferences being the most entertaining. And we can’t blame the guy for not making them popcorn worthy event. Not every fighter has the skill to navigate sometimes boring questions from reporters and convert the answers in a 2 minute stand-up comedy. But regardless of Cody Garbrandt’s lack of entertainment outside the octagon, he is an incredibly exciting fighter inside the octagon. Every UFC fan knew of Cody’s stoppage during fights. Out of his 11 fights as a professional mixed martial arts fighter, only 2 fights have gone to a decision. Cody has been an upcoming star lately with his technical punching and ability to deliver incredible blows that stop their opponents inside one round. In addition to Cody’s spectacular performance so far, what allowed Cody Garbrandt to be put on this list is his fight against Dominick Cruz. This matchup was a highly anticipated UFC fight, especially with all the rivalry going between Team Alpha Male and Dominick Cruz. Once they both stepped into the octagon, Cody felt so confident in his abilities that he started taunting Dominick. We’ve never seen this before from Cody and what a performance did he put up with all the taunting. Fingers crossed he puts up another show like this as we saw lots of memes online after this fight.

Some of you might be surprised what Gunnar Nelson is doing on this list of the most entertaining UFC fighters. After all, he doesn’t really stand out as someone that’s super high energy and, although his performance in the ring has been great, he is not rocking a zero loss record. Most of his fights are not even won by a knockout but rather submission. What got Gunnar on this list is his unique attitude that we have never seen before. Gunnar Nelson is the calmest and stoic-like MMA we have seen. Gunnar is a non-reactive MMA fighter to such a level that we’ve classed him as an entertaining fighter and had to put him on this list. When watching Gunnar either inside the UFC octagon or in a UFC press conference, you can’t help but wonder how he stays so calm. Even when Conor McGregor gave Gunnar Nelson a brand new Harley Davidson motorbike, Gunnar smiled with the same expression as most people do when they find a twenty dollar note on the ground. 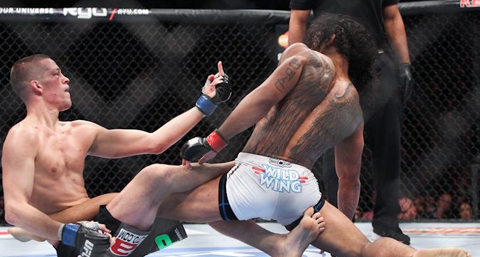 We have to put the Diaz brothers in the third place on this list of most entertaining UFC fighters. Known for their trash talk, volume punching and the Stockton slap, the Diaz brothers always deliver an action packed experience inside and outside the UFC octagon. Not afraid of speaking their mind, they are not on the best terms with many fighters within the UFC but they sure are on good terms with the fans. Although the record of both brothers is not the most impressive one, their fights have it all – great boxing, awesome ground game and, if you’re lucky, you can witness the famous Stockton slap which is a slap Diaz brothers deliver when they begin to feel really comfortable with their opponent. They don’t always get along with the UFC but they sure deliver when it comes to fights.

Jon Jones has had a lot of attention over the past few years. He’s had trouble with the law, has been known to take drugs before fights and tested positive for banned substance before his fight against Daniel Cormier. What allowed Jon Jones to get on this list is ability to entertain fans both inside and outside the octagon. Jon Jones doesn’t usually try to entertain people during interviews and conferences but he just happens to do so more often than not. Jon usually has been the highlight of each press conference he’s been on. The most entertaining ones have to be with Daniel Cormier as they both unleash insults on one another. Apart from his entertaining interviews and press conferences, Jon Jones is an outstanding fighter. We had to get Jon Jones on this list of entertaining MMA fighters as his fights are always awesome to watch and he provides the full entertainment experience.

Without a shadow of a doubt, we had to place Conor McGregor as the number one fighter on this list of most entertaining MMA fighter. Let’s list some of the things that got him to become number one on this list. He’s predicted the outcomes of his fights with great accuracy; he knocks fighters out in a spectacular fashion; he became the first two weight division UFC champion; he has the funniest UFC press-conferences; his confidence is mind blowing; he wasn’t afraid to up in weight classes; he fights everyone; the list goes on. Love him or hate him, there has been no one like Conor McGregor when it comes to entertainment and he is the funniest MMA fighter we’ve ever seen. Conor has been able to deliver the funniest jokes in press conferences with such a consistency, that you know when you’re tuning in for a press conference with Conor, you are in for a big treat. We don’t think any other fighter has as many compilations of funny sayings as this Irish legend. On top of this, every single of his fights has been amazing to watch. Our favourite must be Conor McGregor vs Nate Diaz 2 which must be one of the best fights in the UFC ever. He easily is the number one funny and entertaining MMA fighter.