Khabib Nurmagomedov has been one of the most impressive fighters UFC. With a nickname “The Eagle”, fighting out of Dagestan, Russia, Khabib Nurmagomedov has taken the UFC fan attention with a storm. With a style that, as Joe Rogan nicely has said, mauls the opponents, his grappling abilities are yet to find an equal match in the UFC. Khabib Nurmagomedov is holding a black belt in judo and is a two time Combat Sambo World Champion. With an undefeated professional record of 24 wins and 0 losses, he is the strongest lightweight contender in the division. Many top fighters in the UFC have had their loss and what makes Khabib unique is that he is still yet to have his first loss.

What makes Khabib Nurmagomedov so popular?

The obvious thing is his professional MMA record. MMA is one of the most challenging fighting sports to hold an undefeated record and it is very uncommon in the UFC. Khabib with the longest undefeated winning streak in UFC, is someone not to take lightly. He also has one of the largest Instagram following (https://www.instagram.com/khabib_nurmagomedov) from the UFC fighters with 2.3 million followers.

Many fans have been waiting for his chance at a title shot and some of the matchup decisions have been very controversial as others have had the chance before Khabib Nurmagomedov. Khabib is quite outspoken but at the same time, rather charismatic fighter. Khabib is has not been afraid to say what is on his mind. Even in his fight against Michael Johnson as he was telling him to give up during the fight while telling Dana White in between rounds that he will “smash up his boy” (meaning Conor McGregor).

Khabib Nurmagomedov - A Look Into History

Khabib started fighting when he was just 6 years old. With a family history of fighting, his brother was a world champion in Sambo and his uncle was highly respected wrestler. Khabib grew up training with his relatives as he grew up under the same roof with 15 of his relatives, all training together. While growing up, Khabib would often end up in street fights. Khabib has his first professional fight in Ukraine against Vusal Bayramov. He earned 2000 dollars for coming out victorious and had his first taste for getting money from fighting. As Khabib was getting more serious with the professional side of fighting, he became less of a street fighter and focused on becoming a professional.

When Khabib made his debout fight against Kamal Shalorus, which happened in Nashville, Tennessee, he first showed the UFC fans his incredible grappling skills by submitting Kama with a rear-naked choke. His nickname “The Eagle” was given to him right before the fight as he decided with the help of his friends that he should represent the symbol of Dagestan which is an eagle.

While he not known for quick finishes, he sure is known for dismantling his opponents with his grappling skills. Interestingly, only 2 of his 8 UFC victories have come as a result of submission, 4 have gone to a decision 2 with a KO/TKO finish.

Khabib Nurmagomedov And His Hat

Khabib has been seen on many occasions to wear a blonde wig. This hat is known in the Caucasus areas and it’s a wool hat that is worn by men. These hats are commonly worn in mountainous regions and are considered an important part of men’s clothing. The word ‘papakha’ stems from Turkic language and has certain traditions associated with it. 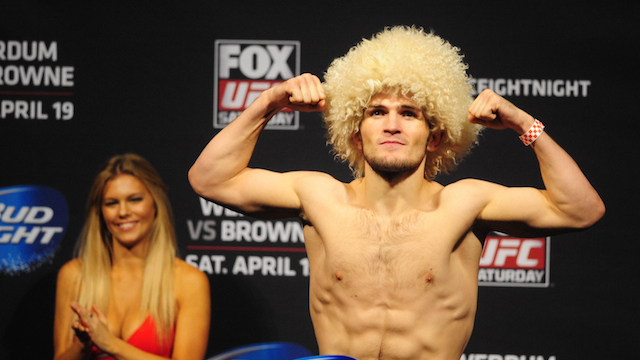 Khabib has been repeatedly asked whether he wants to fight Conor McGregor and he has usually replied with similar answers – he doesn’t care about whom he fights as he cares only about the belt. This did not stop Khabib Nurmagomedov to exchange words briefly with Conor after UFC 205 where he told Conor that he will break his face. Khabib doesn’t seem to have high opinion of Conor as he has called him “a chicken” after his loss to Nate Diaz. This matchup, after Conor McGregor vs Floyd Mayweather, is one of the most anticipated matchups UFC fans are eagerly waiting for. Conor’s grappling abilities have been already tested against the likes of Chad Mendes. What makes this matchup interesting is that Conor has not faced in UFC someone like Khabib Nurmagomedov, who has not lost yet a single fight.

Khabib Nurmagomedov’s Fights That Got Cancelled

Although Khabib is only in his late twenties, he has suffered multiple setbacks that have prevented him from making the fight. Khabib pulled out of UFC 187 as he was scheduled to fight Donald Cerrone as Khabib informed the UFC of his injured knee. This injury was not as a result of taking damage but rather unfortunate movement during sparring that resulted in Khabib’s previous knee injury to surface again. Khabib had a knee surgery in July of 2014 where he successfully got his meniscus repaired in his right knee.

He had a UFC fight scheduled with Tony Ferguson in December of 2015 and this did not take place due to a rib injury that Khabib suffered. On his instragram account, Khabib Nurmagomedov wrote that he wasn’t sure if he’d ever come back to fight again. Luckily, to fans, after 2 years since his last bout, he did return to UFC in April of 2016 as he faced Darrell Horcher and won the fight by a TKO in second round.

Khabib was meant to face off Tony Ferguson again in UFC 209 but this time, he did not make the weight cut and fell ill just before the weigh-ins. The doctors that Khabib Nurmagomedov saw at the time suggested that Khabib doesn’t enter the fight. Dana White confirmed that a fight was still likely on the cards if he had seen the UFC doctors. Khabib has been scheduled to fight Tony Ferguson for the third time and it still hasn’t taken place. Second time it happened was due to Tony Ferguson pulling out with an injury of his own.

Khabib Nurmagomedov is a very exciting fighter to watch and we can only hope that the highly anticipated match-up would take place between Khabib and Conor McGregor. Even if he would face Tony Ferguson instead of Conor, many fans would tune in to see this super fight. Hopefully no further injuries set him back and let's keep fingers crossed to see more of Khabib in the following months.